Hello from sunny Las Pinas!  I guess I’ll just share a little experience that we had this last week that really helped me feel that God loves us. About 3 weeks ago we were referred to go visit a next door neighbor who had just recently moved to our area. The member had told us that this older woman, Norma, would like a visit from the missionaries. As we started teaching her the first few times, it was difficult to communicate with her because she spoke another language, but we found out that she was sick and has a really hard time sleeping. At night she would just stay up and try to pray so that she could be able to sleep. So we just taught her some simple principles, first.. that prayer is to our Heavenly Father, not anything else. And then we also helped her understand how faith played an extreme role in bringing to pass our prayers. After we had taught her this principle many times, we felt like she wasn’t going to pick it up, but then my companion, Elder Baylon, had the idea to give her a blessing.  During the lesson before we blessed her she said that she just wanted to feel the Spirit so badly… and then after we closed the blessing, she said to us that she had felt something she hadn’t really felt before, we went back last night to try and follow up and see if she was able to sleep. Her husband came to the door and told us over and over again how sorry he was that his wife couldn’t listen to us because….. she was asleep!  My heart just felt so good when he said that. That’s the first time I’ve been happy that somebody had an excuse not to listen to us.  It just felt really good.

My new companion Elder Baylon is from San Diego. He lives really close to Sea World.  He is really cool!  He was one of the mission office secretaries for a few transfers, so he is coming from the office.  He is really spiritual and I love it.  Teaching just takes a whole new form.  Its interesting how teaching can sway from one style to another and back again and change and get molded.  I know it depends on what the investigator needs and I’m glad that he is my companion.

Oh yeah, something cool. We’re teaching a legit muslim guy. He works over in Saudi Arabia and was converted to the muslim religion when he got there. He had grown up reading the Bible, and so he is just kind of confused on what is right.  We’re going back to him this week to follow up on his prayers about the church, Joseph Smith, and the Book of Mormon, and we’re going to teach about the Godhead.  It should be exciting.

Sometimes on the tricycles and jeeps people will put their favorite scripture verses on them…so one that I saw and looked up that I liked was Nahum 1:7. Its about trusting in God. Love you! 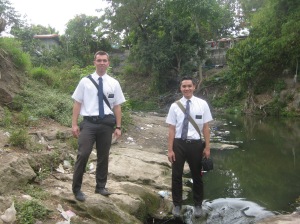 Elder Burbidge and Elder Baylon at a river near their area.

Hello Family!  Its me, Elder Burbidge… just having a great time here in Las Piñas. Elder Baylon and I have had some pretty sweet adventures haha!  Today we don’t have too much going on, but we are going to go grocery shopping at the nearby grocery store instead of the farther one, and then we are going to get some lunch and come back to the apartment and do some laundry and chill on the front patio.  We’re going to clean too, but our apartment is pretty clean already so it’ll be a quick one. But this week has been pretty good.

Nothing much has happened this week, but we do have a lot of investigators that are really starting to take off and grasp things such as the Book of Mormon and the need for the restoration. they’ve been coming to church and are about half way through the process to be baptized.  We’re going to teach one of them tonight to try and help them understand more fully the Plan of Salvation and stuff, but we’re really hoping they keep progressing.

Well, I’m kinda running a little outta time, and I still need to email a few more people but I just want to thank you guys for all of your updates and happy thoughts and prayers. I don’t know how its going to be like coming home, it kind of freaks me out… I’ve heard its harder to come home than it is to come out. But anyway, I guess its getting closer, huh? I love you guys. I miss you guys, but I know that the Lord watches over you constantly 🙂  I found a good scripture that can help us choose the right… I love it. Helaman 14: 30-31.

Have a great week!