Hello everyone from a very hot and humid Philippines!  It was very hot yesterday and the day before which sometimes means that there is a storm or something coming.  But then again, sometimes its just hot!  In other exciting news, our investigator came to church for the third time!  His name is Dindu and he is awesome.

Recently I learned how the Savior helps us to keep going.  At zone conference one of the assistants to the president showed a video about football.  One of the players was having a bad attitude about an upcoming game and the coach called him out on it.  He was going to make him do death crawls (crawling with another player on his back) for 50 yards. The coach asked the player if he would give it ALL that he has, his very best. The player shrugged it off… the coach asked again a little louder.. and the player muttered, “yeah.. okay”.  Then the coaches voice got quiet and he looked him right in the eye and said, “Will you give it your very best?” the player got kind of freaked out and promised he would do it.

The coach put a blind fold on the player and told him to get ready. The other player got on the back of the other and they started crawling. Right off the bat the coach told the player to keep going that he was doing great and to block out the pain.  After what seemed like a while, the player asked if he was at the 20 yard-line yet, the coach didn’t tell him where he was but could tell that the player was starting to struggle greatly.  The player got mad and started yelling at the coach. “Tell me tell me! It hurts! I wanna stop!”, but the coach chastised him, “You told me you would give it your BEST. Can you still move?!!  Keep moving!!” and so it went until it was a long time.

The player was still going, he was starting to cry and to crumble under the weight of the other player. The coach started crawling beside the player raising his voice each time the arms of the player started to bend too far down.  At this point the coach was constantly at his side and urging and encouraging him to keep going.  He told the player that he wanted his best until he was exhausted.  At last the player collapsed in tears and groans of pain, mentally and physically.  The coach comforted him and asked, “Did you give it your best?” The player replied affirmatively.  The player had reached 100 yards and had done it only from strength from within and true encouragement from the coach.

Jesus Christ is our coach. We might cry, we might hurt, we might complain, sigh, yell, strain, stretch, resist, fight, and yearn for another’s help.  But it is Christ’s help that will help us gain salvation.  It is His word and His knowledge that can drive us to the end of our existence. To the end of our strength. But only if we believe him and ACT.  Please listen to the words of the modern day prophets. PLEASE, listen to the missionaries. PLEASE, read the scriptures. We can only make it if we accept his word of encouragement, and those words are in those places.

I love you all! 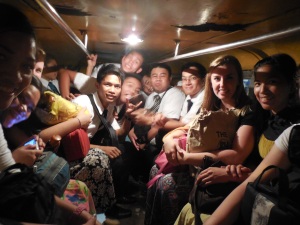