Hello! I hope everybody had a good week this week. This week was pretty hectic. We had a lot of meetings and we tried to get in as many lessons as we possibly could. I’ve learned a lot this week about leadership and being an example. On Wednesday I attended a leadership training that was taught by our Zone Leaders along with President and Sister Tye. It was great to have a refresher and to learn about some things that I hadn’t come across yet that I might in the future. It was a neat experience to meet with the other leaders and get their point of view on things as well.

On Wednesday I had the opportunity to attend the “New Trainers Meeting” for the missionaries that will be training this next batch of new missionaries. I found it interesting how diverse the new trainers were. Not just in terms of nationalities, but different personalities as well.  There were also missionaries that had just been trained and will now train, and missionaries who had been in the field for almost a year and a half that will now train for their first time. There were former zone leaders that would train, which was interesting, but it really illustrates the importance of a trainer.  The trainer is one of the things that is the most influential to a new missionary’s entire mission.  The trainer gives the new missionary a picture of what the mission should be like and is almost like a little sibling who follows everything that you do.  I’m excited! I know that it will be a Filipino, so I’m hoping my Tagalog will prove me well! 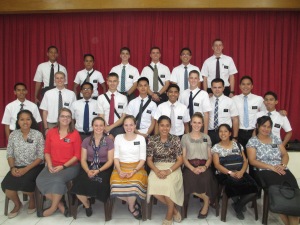 I had an experience this week that I would like to share with you! I was watching one of “The District 2” episodes for my additional study one morning this week and at the end of the episode, each one of the missionaries was talking about what they have been learning and what they are thankful for from their mission so far.  It made me really ponder about what I was thankful for, and I realized that although this has been the hardest thing I’ve ever done, it has also been the most rewarding.  I’ve learned to get along with others better.  I’ve learned to solve difficult problems in the lives of others.  I’ve learned how to be happy and grateful even if things are pressing me to the limit.  I’m thankful for my each one of my companions so far, and as I look back so far I’ve learned a lot of things from each of them.  I’m thankful for where I am at right now in my mission and have learned to be patient with myself. I don’t list these things to brag or boast, but to show you what God has done with my life in just these short eight months.  I never thought I’d be thankful for a challenge because I used to be scared of events that would stress me out!  But now I see it as a point of improvement. So that being said. . .LIVE IN GRATITUDE.  Be thankful for the things that will eventually make you stronger!  Be ready for trials to arise that you don’t know how to handle and then ask questions.  Be humble and patient with yourself and ask for help.  Ask your parents, brothers, sisters, friends, and ultimately, ask God.  He will help you – I know it.

The baptism of Renren. He was taught by the sister missionaries.

I’m thankful for all of you! I miss all of you like crazy, but I know that this work is TRUE and REAL, and worth it!  Keep on Keepin’ on.  Things will work out, just have faith.

Have a good week everybody! ‘til next week…

1 thought on “Deep Thoughts from the Mission Field!”