Merry Christmas to everyone back home and to everybody who reads this! It’s a humid 75 degrees here in Tanza Cavite, Philippines and Christmas is in full swing! A LOT has happened this week. Once again, I HAVE A NEW COMPANION. Elder Doloritos! He’s a super cool guy! He is also serving as the new District Leader of the new TANZA DISTRICT which comprises of six Elders. In Tanza, we now have 4 Elders, so the apartment is now full, which makes a good time for Christmas and the Holidays! The other two elders in the district are in a nearby town. 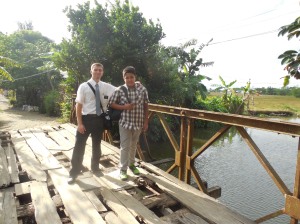 Out doing missionary work with a local resident of Tanza

In ways of preparing for Christmas, we’re trying to have appointments, but it’s difficult because a lot of people go back to where they grew up. So we’ll end up visiting a lot of members I think, or we will do finding work if the situations line up correctly (ie. dinner appointments fall through or something). Also, the Tanza Branch had a little devotional and so we attended that a few days ago as well.

I get to talk to my parents in a few days! I’m so excited!!!!! I hope you all have a great Christmas. Tandaan ninyo si Jesus Christ! Remember Jesus Christ this season! He is the ultimate gift to us. Merry Christmas! ‘Til next week!

Check out the little youngster in the background!

1 thought on “Christmas is Almost Here”